We all are more than aware of the threats to wildlife in Africa and elsewhere, but did you know that the lion population in Africa has nearly halved in the past 25 years? Habitat loss, illegal wildlife trade, poaching and human-animal conflicts continue to threaten lions across Africa. The IUCN (International Union for Conservation of Nature) has classified the lion as “vulnerable,” with the West African subspecies even being “critically endangered.”

Fortunately, there is still hope. The lion is a resilient species of animal and turnaround is still possible if the problems, however varied in appearance, are addressed.

To reverse this sharp decline in the lion population, the Lion Recovery Fund (LRF) was established in 2017 by the joining of forces of the Wildlife Conservation Network (WCN) and the Leonardo DiCaprio Foundation. The LRF invests in the most innovative and effective projects in all of Africa. The organization seeks, assesses and invests in the best ideas for lion restoration, ensuring that 100% of every dollar donated directly reaches the supported projects. The ultimate goal and mission of the Lion Recovery Fund is to double the number of wild lions in Africa by 2050.

The video below shows why lions are in trouble and what we can do to help them recover. The story is narrated by Leonardo DiCaprio.

Joining forces in a unique way

This ambitious project can never be successful only through the scientists and the LRF budgets supporting their projects. There is an important role that tourism – carefully managed and executed – can play in nature conservation in the success and the results within the LRF.

Four ‘founding partners’ formed the Lionscape Coalition within the LRF in 2018. In this initiative, commercial competitors in the safari business they run, left competition on conservation efforts behind and got together to help secure a future for the African lions and their habitats. Wild lion conservation is synonymous with the conservation of Africa’s wilderness. By inspiring and informing their travellers about the threats these animals face, the Lionscape Coalition can play a critical role in the implementation of the LRF’s mission. 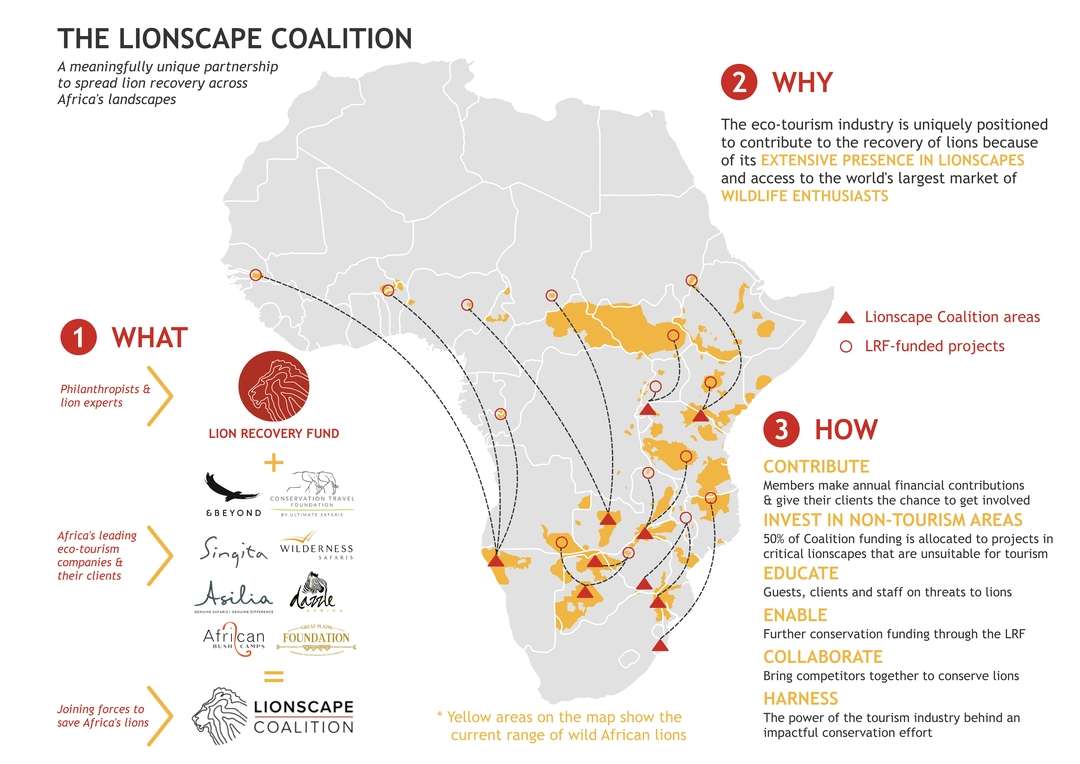 Working together for the future of the African lion

No one can perform this mega task alone. Only by joining forces in strategic partnerships can the lion populations return. In addition to Africa’s three major safari organizations (& Beyond, Singita and Wilderness Safaris), the Conservation Travel Foundation embarked on this challenge as the little but tough Simba of the coalition.  This foundation is led by Thika Travel’s Namibian partner Ultimate Safaris. Together with a third partner/colleague tour operator from the UK, Thika Travel is a proud and fully-fledged partner in the Conservation Travel Foundation and thus as founding partner of the Lionscape Coalition. Later, the conservation arm of our regular safari partner Great Plains, also joined as the fifth ‘pride member’. Fortunately, three other safari/tour operators followed in support as united we stand strong.

Thanks in part to Thika Travel’s annual contribution of USD 13,333 (pandemic or not) to the USD 50,000 that the Pride Members each annually donate, we can contribute to the Lionscape Coalition tourism chapter within the LRF through the Conservation Travel Foundation. The regularly recurring desert lions project of Dr. Philip Stander, also highly supported by the Thika Foundation and its donors (all Thika Travel clients)  is recognized (and financially supported) by the LRF as an essential element in the recovery of the lions.

Do you want to know how you can contribute to the recovery of Africa’s lions, donating fiscally friendly via the Thika Foundation or with your trip booked through Thika Travel to Africa? Or would you just like to talk further about – your possible wider contribution to – conservation? Thika Founder and supporting Board Member of the Thika Foundation, Joost Tania, will be happy to tell you about the right choice of travel content or other support options. You can best reach him via jftania@thika.nl.

For more information about the highly commendable work of the Lion Recovery Fund, the projects they selected to support across Africa and/or the important role the Leonardo DiCaprio Foundation plays in conservation, please visit the Lion Recovery Fund website: https://www.lionrecoveryfund.org/