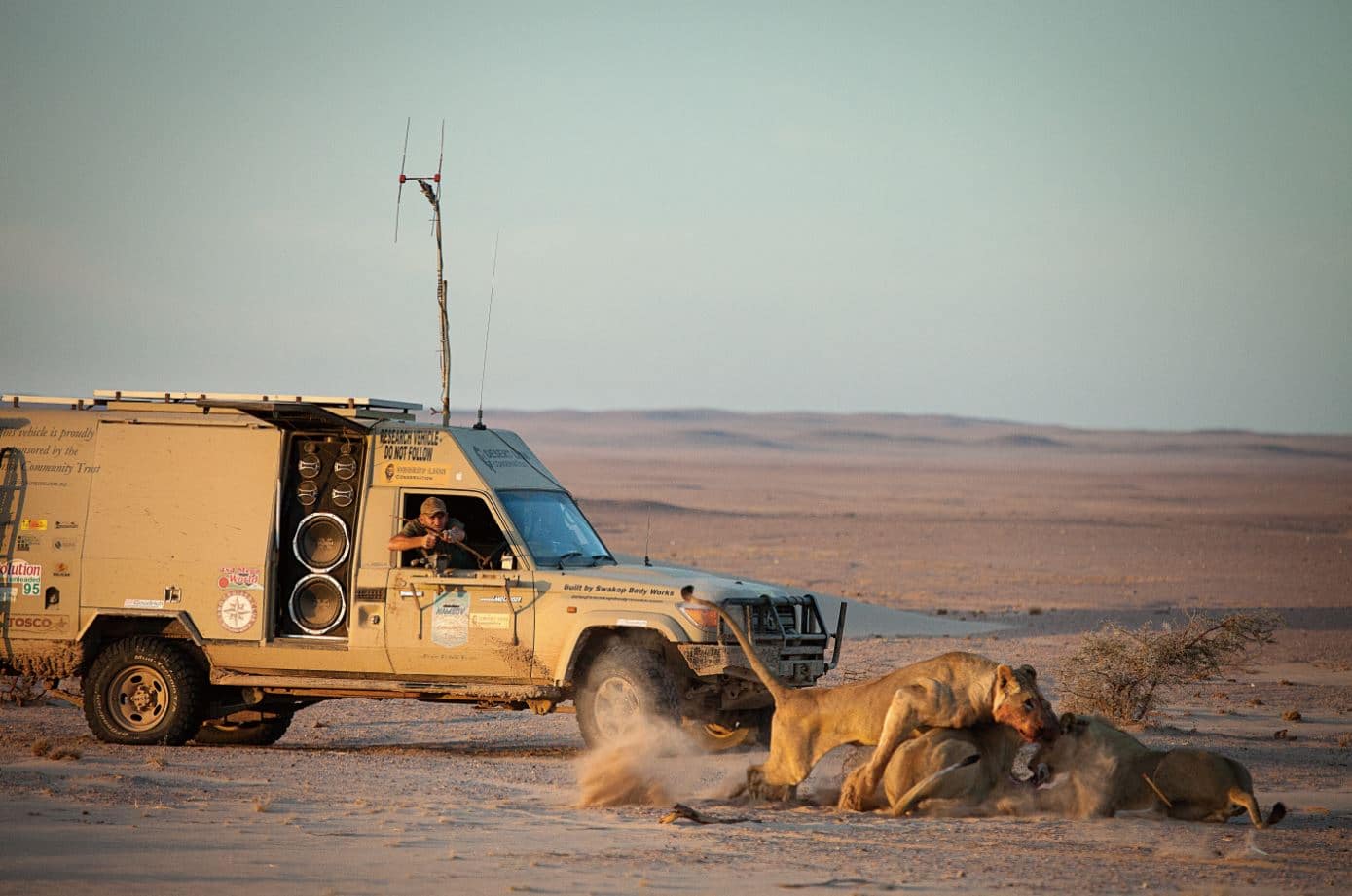 For months, Joost – owner of Thika Travel and board member of Thika Foundation – had been talking about the unique man he wanted to invite to The Netherlands for a lecture. He meant Dr. Philip Stander, or ‘Flip’ for friends and family. March came around and finally the time was there: Philip and his partner Emsie touched down at Schiphol Airport.

The Herman van Veen Arts Centre turned out to be the perfect location for an impressive lecture. More than a hundred guests filled the lecture hall and listened breathlessly to Philips story. His life’s mission is undeniably admirable – he monitors and protects the desert lions of Namibia. For weeks on end he lives amongst the lions to track their movements and habits.

With noticeable excitement tinging his voice, Philip speaks about the moment when a small group of desert lions was re-discovered after their supposed extinction. Out of pure passion for these remarkable animals Philip started the Desert Lion Conservation Project in the nineties. Within twenty years, the population of lions grew from a dozen to a hundred-and-fifty. Philip shows breathtakingly beautiful images of lions, lionesses and their playful cubs on never-ending desert plains.

Success and misfortune, however, often go hand in hand. The steady grow of the desert lion population resulted in a rise in human-wildlife conflict. For local farmers, the lions are a huge threat. The cattle that is indispensable to their way of life is an easy target for the big cats and the farmers will go to great lengths to protect their property. Sombre images of lions shot to death fill the hall with emotion.

Philip tells his captivated audience about his human-wildlife conflict management plan and early warning system. In short, this system warns the local communities whenever lions are nearby. They can then take necessary precautions such as put their cattle in enclosures, and thus reduce the need for conflict.

In order to track the lions, Philip has outfitted a few dozen of them with special GPS collars. These collars work with special software designed by IT specialist Luuk Eikelboom from CARE IT Services. Luuk gives the audience a demonstration of how lions can be followed live on the screen. Amazing to sit in this tiny village in The Netherlands, watching lions strut around nine thousand kilometres away!

Philips work hasn’t gone unnoticed by the larger audiences. Filmmaker and speaker at this lecture, Lianne Steenkamp, talks about how she and her husband Will followed Philip and ‘his’ lions for months. The results is the amazing two-part documentary ‘Vanishing Kings’, about the life of five young lion brothers. Lianne shows the first part of the film and takes us into the intimate life story of ‘The Five Musketeers’. I think I speak for many when I say that the film moved me, and that more than before I understand the need to keep working on human-wildlife conflict.

Clear is that the same goes for our guests. After the lecture, the books and DVD’s – of which the profit goes directly to Desert Lion Conservation – sell like hot cakes. Philip tells me he’s touched by the heart warming response and that he can’t wait to do it all again tomorrow, at the Thika Travel offices in Belgium.

Selinde Winter has a background in Anthropology and Development Studies and works on sustainability projects for Thika Travel.